The man who brought rock 'n roll glam to Yves Saint Laurent and the attenuated silhouette to Dior Homme, is back to work at the House of Celine, now another shiny cog in the LVMH machine. As the Y was dropped from YSL, so goes the accent aigu from the E in Celine.  A sea change in aesthetics is hitting the shore of the House formerly helmed by Michael Kors ("Thomas Crown Affair" anyone?) and Phoebe Philo.  From the intial look it was clear that theatrical glam and sexy chic were going to be the top notes at Celine, replacing a more spartan, stern, and avante garde femininity cultivated by the beloved Philo.  A masculine vibe permeates the current collection in the protean leather contingent, providing a yin to the overtly femine yang throughout.

We go from maximum shielding of the epidermis to a WHOLE LOTTA LEG in many of the looks as one might expect.  Not for the faint of heart for sure. And yet there many pieces that will be coveted by the more conservative ilk amongst us, in the form of a spellbinding array of jackets and bombers and such.

Bring on the leather and the multitudinous sequins.....HUZZAH! 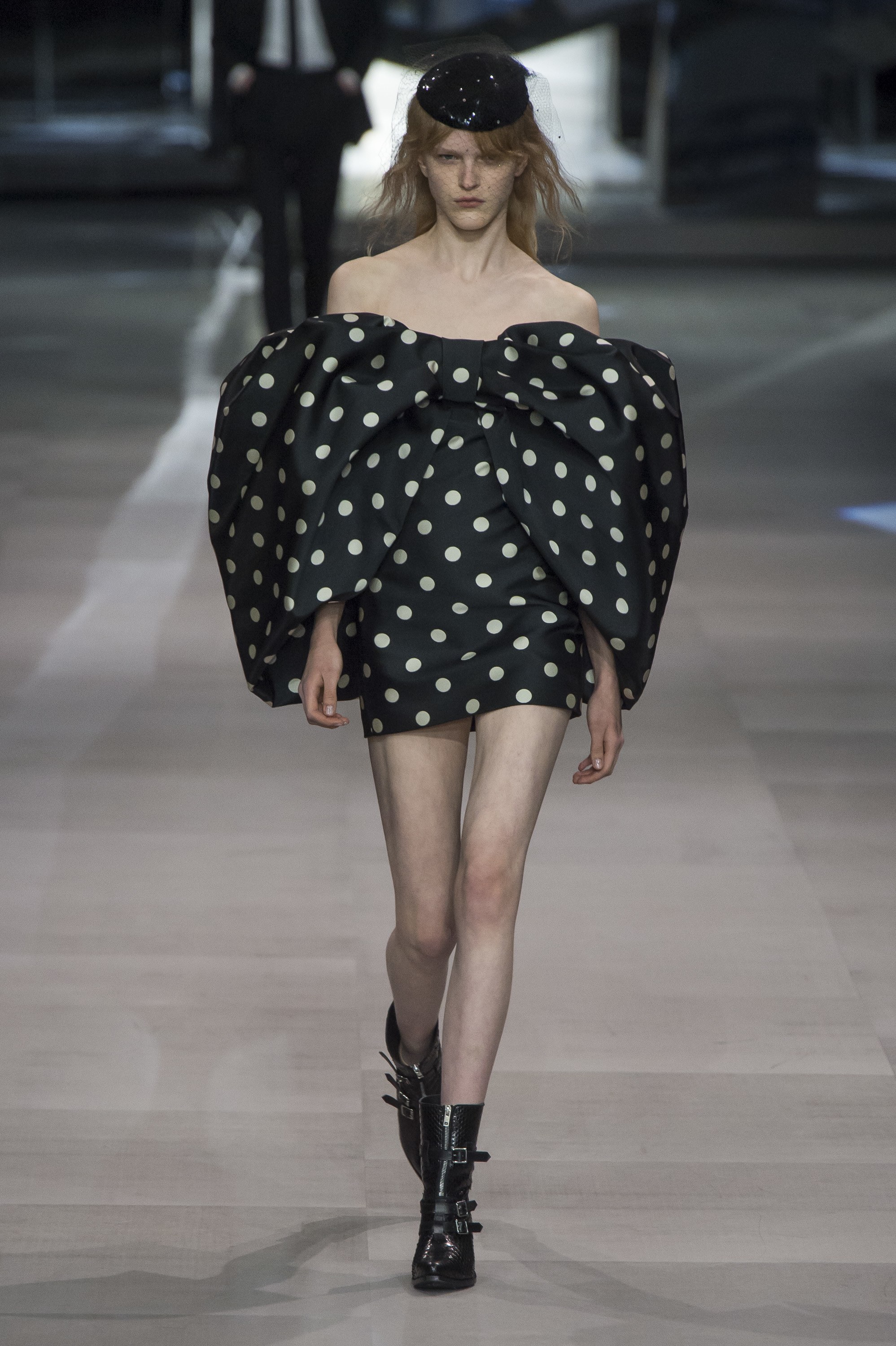 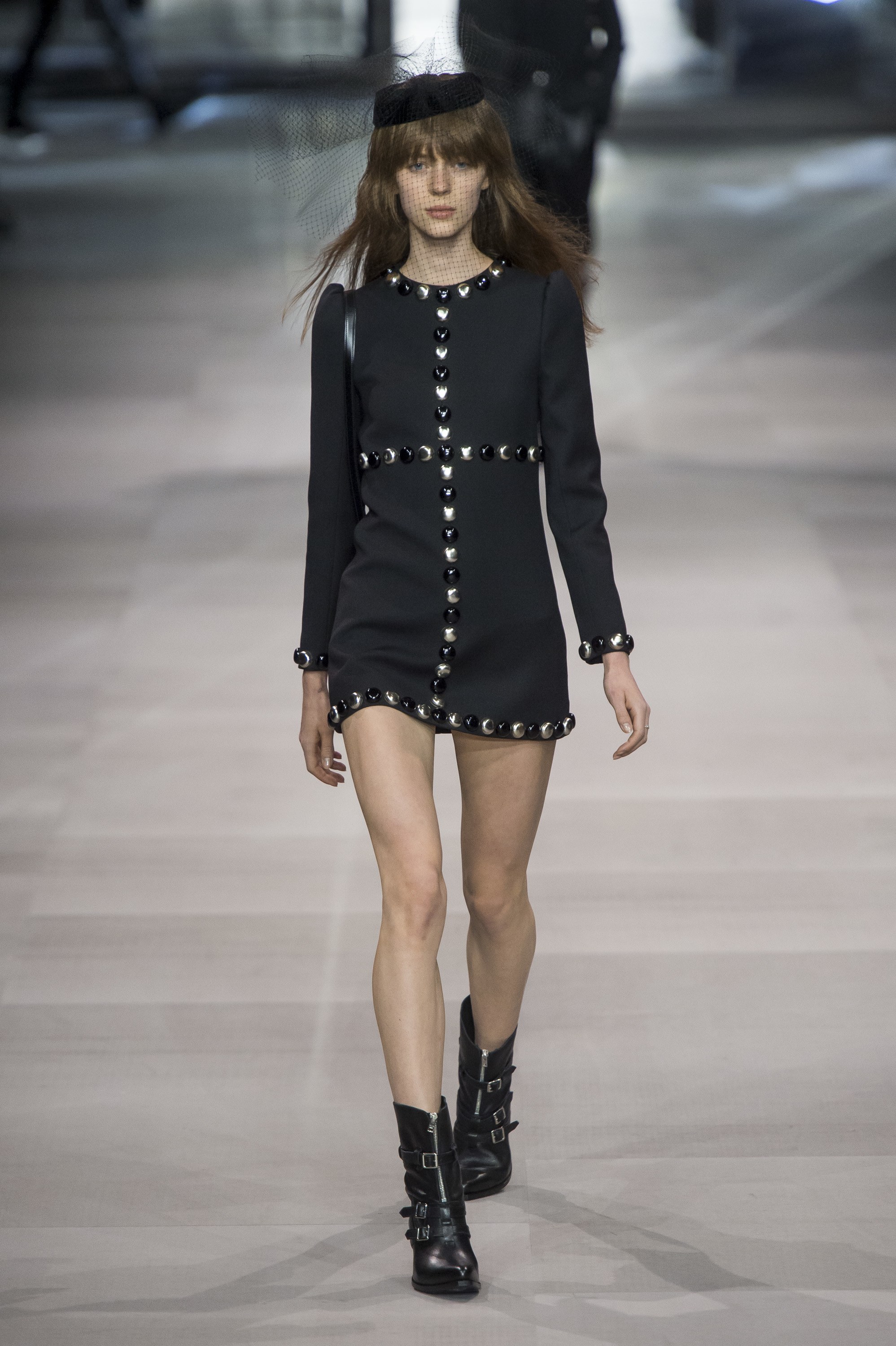 The SLIMANE version of the much hallowed LITTLE BLACK DRESS.  We all need at least ONE (if not TEN).  A little bit Rock 'n Roll, a little bit Audrey Hepburn.  I think every fshionista will hanker for those boots which look somehow appropriate with these abbreviated silhouettes in the context of their creator.  To change the tone of the outfit, just add some Louboutin's of any variety.... 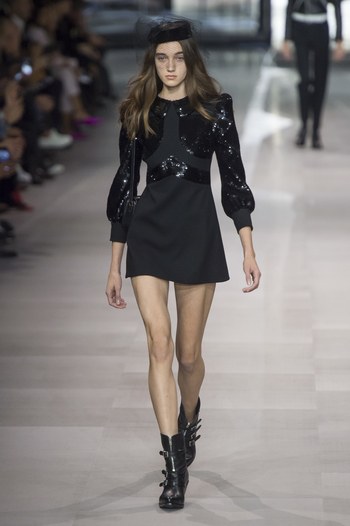 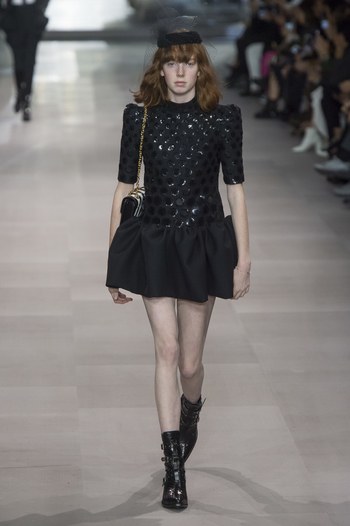 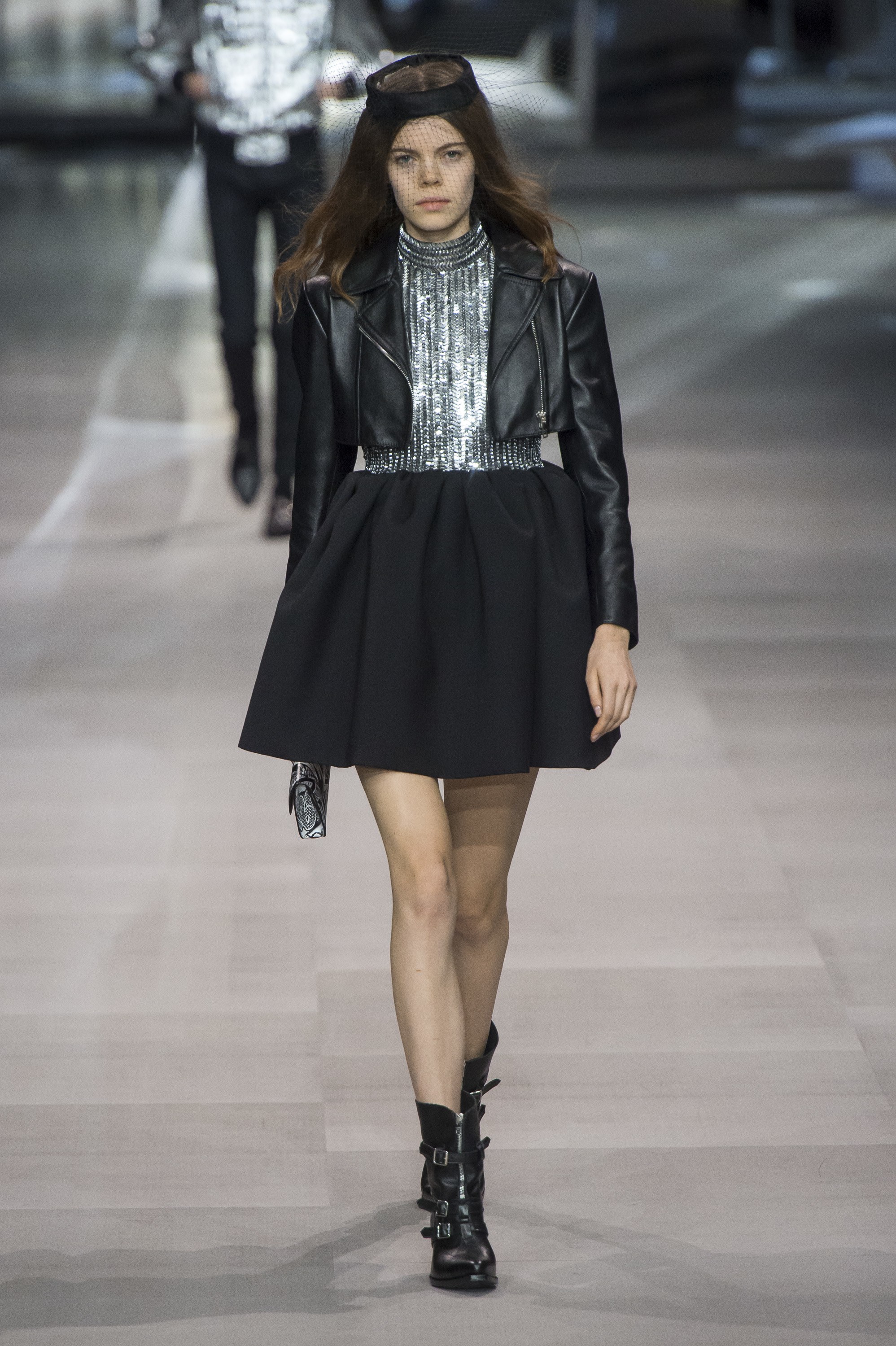 Perfect for any GALA event if you've got the gams. 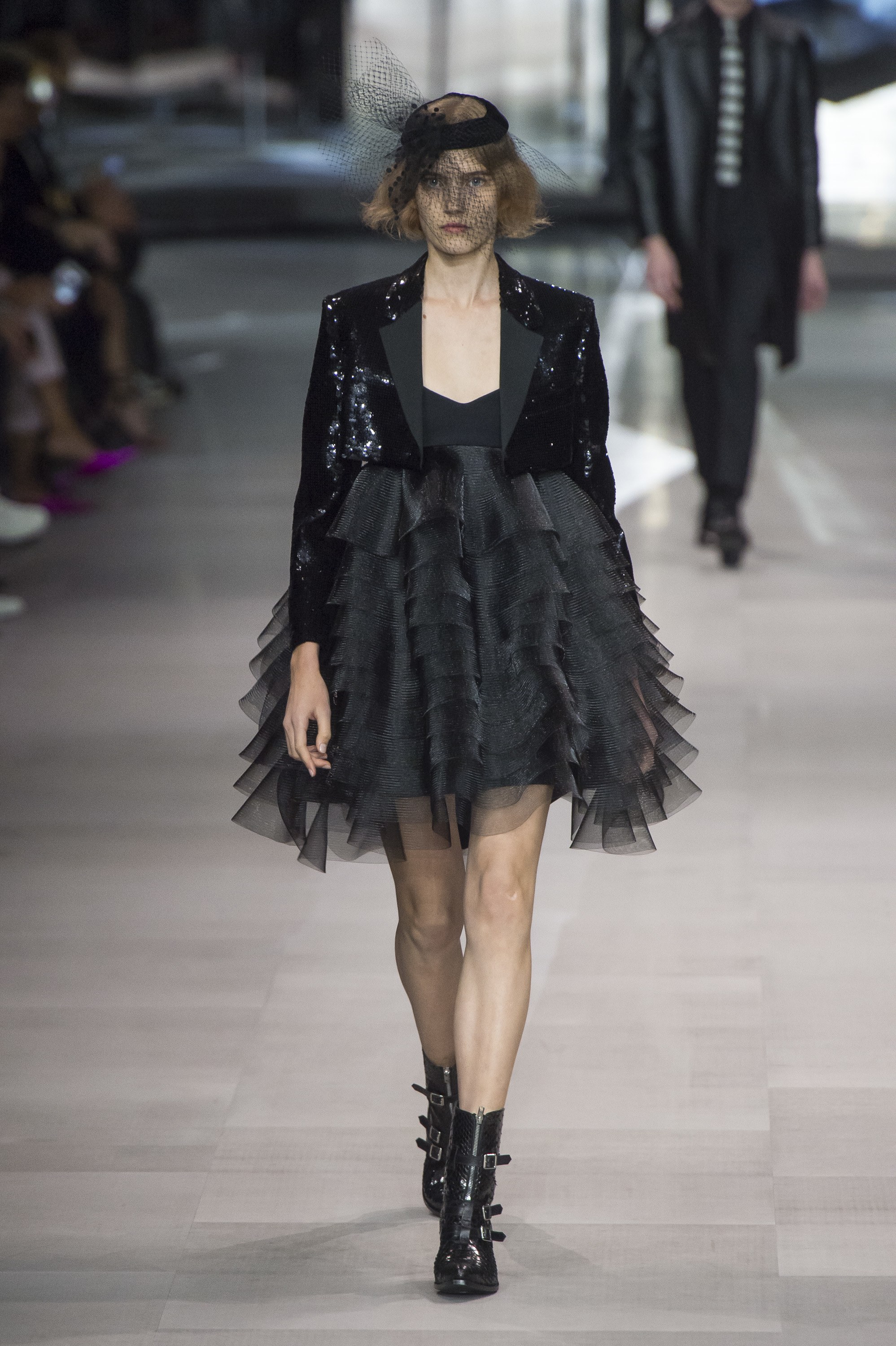 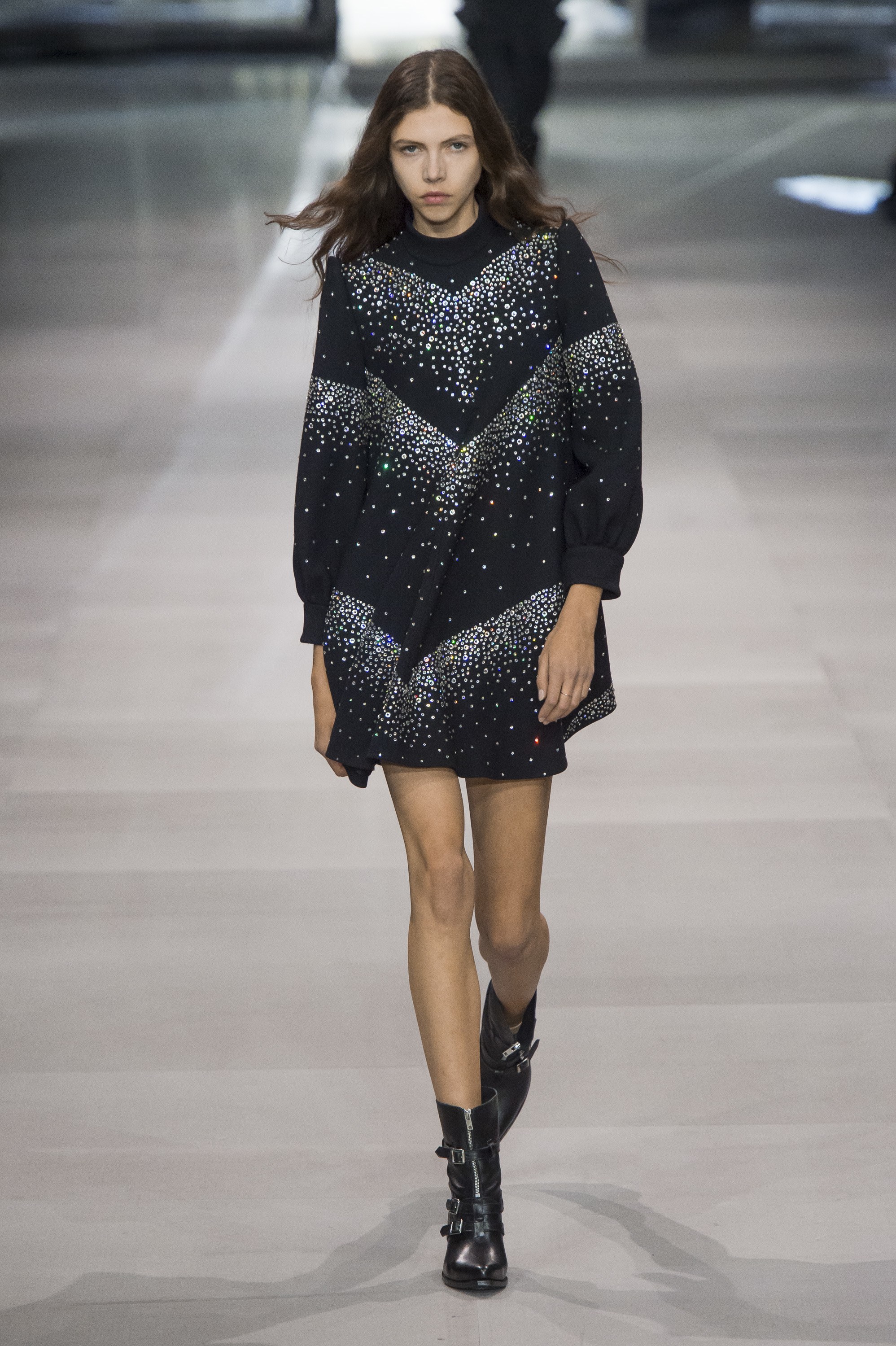 THE perfect LBD for any of us.  Bedazzled just enough to engage and mesmerize but not enough to blind if a Disco ball is in the vicinity. 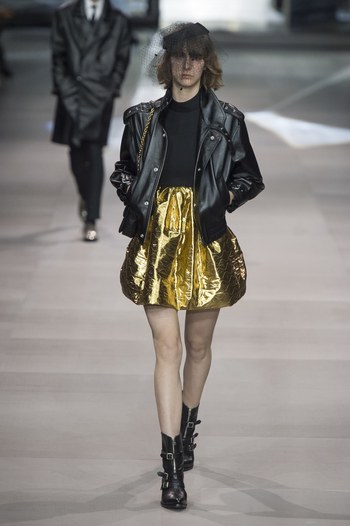 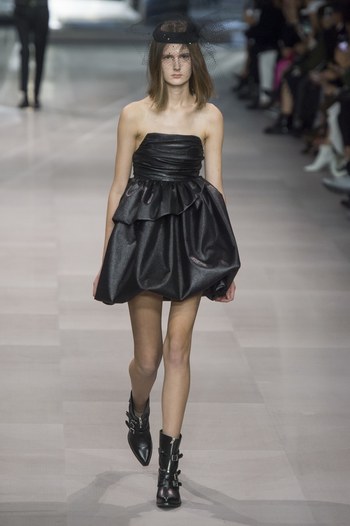 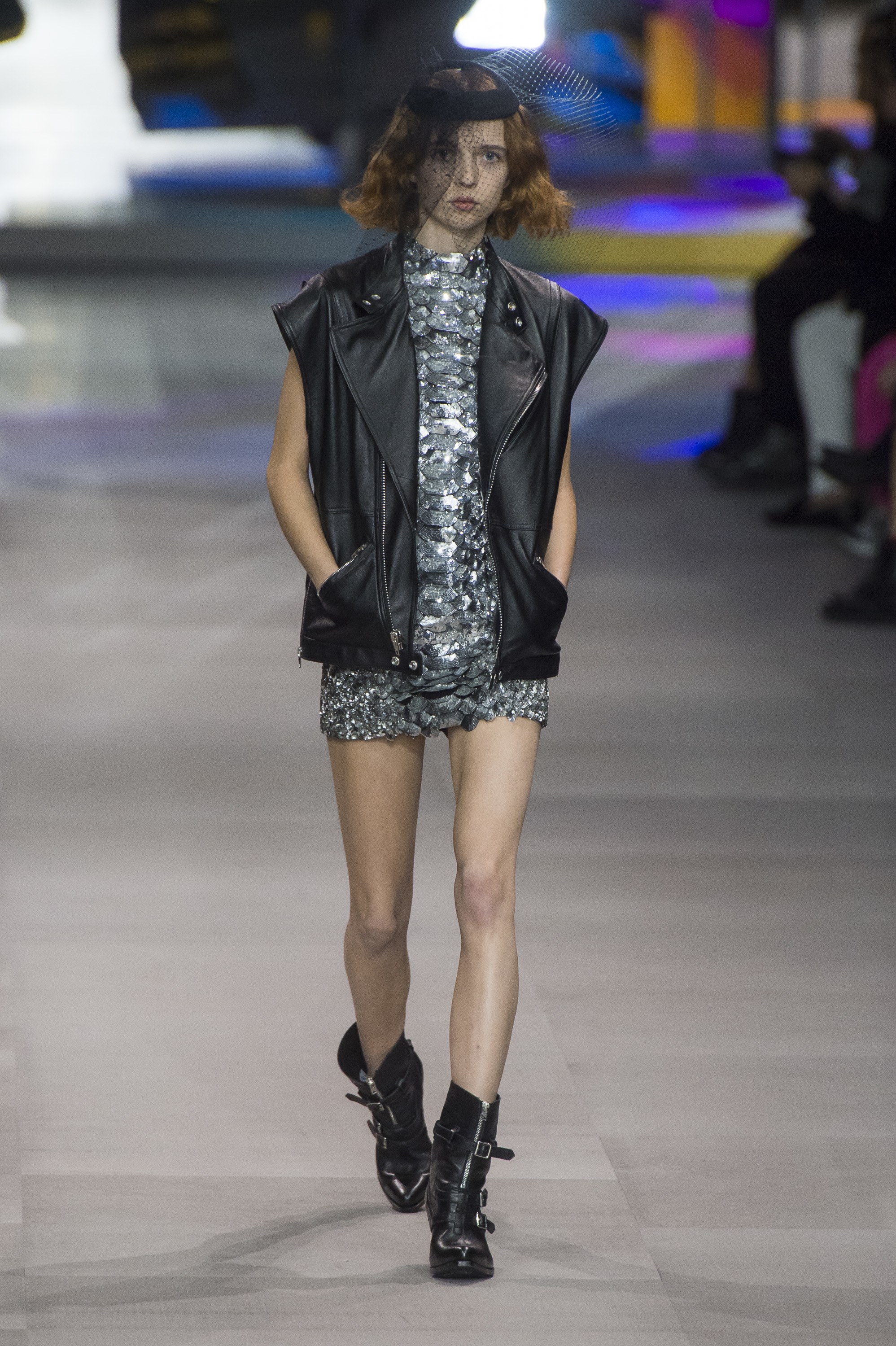 You can take Slimane out of YSL (aka SAINT LAURENT) but well, you know the rest......and that last jaw droppingly stellar frock? Perfect when its time to channel rock legend Jim Morrison, aka the "lizard king'. SHAZAM! 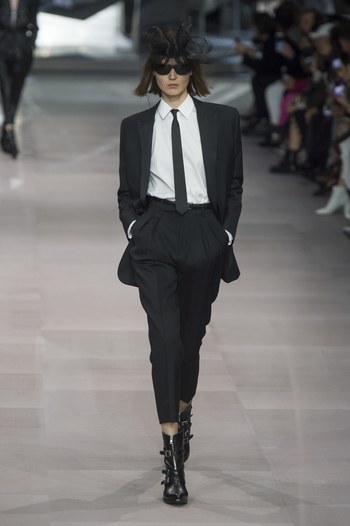 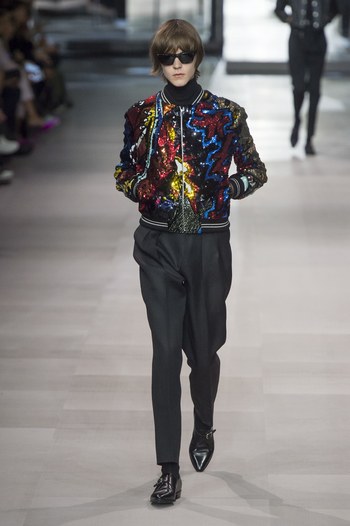 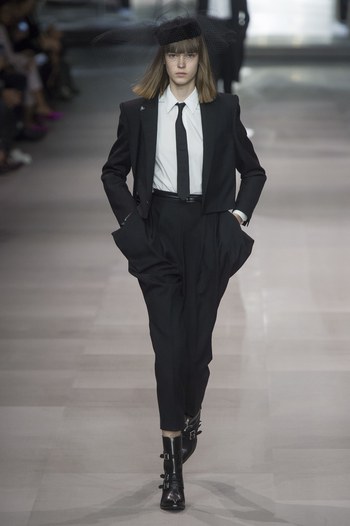 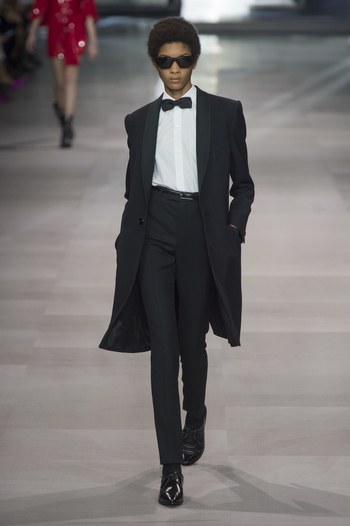 The androgenous contingent.  The SUIT is de rigeur these days and no one does a slim version like Slimane.   As for the embellished bomber, wear as above OR throw over a ball gown (Oscar, Herrera, Valentino....). 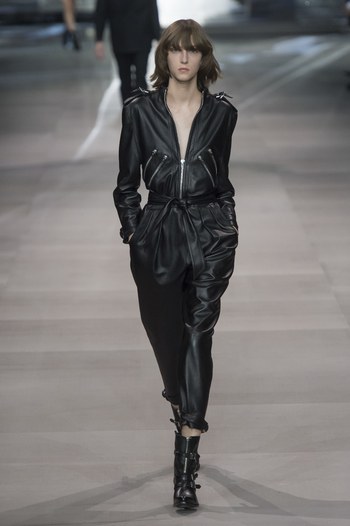 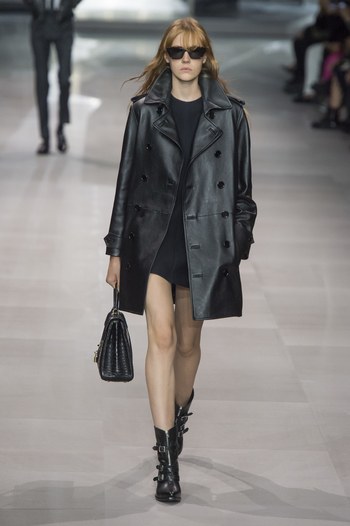 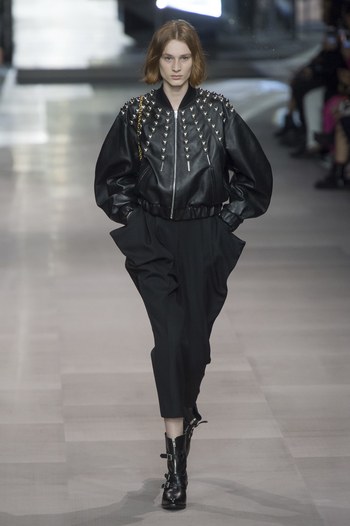 It comes as no surprise that there was no shortage of leather, in a curious spectrum of silhouettes, bringing rock 'n roll bad-ass AND yet somehow also allure...leave it to Slimane. 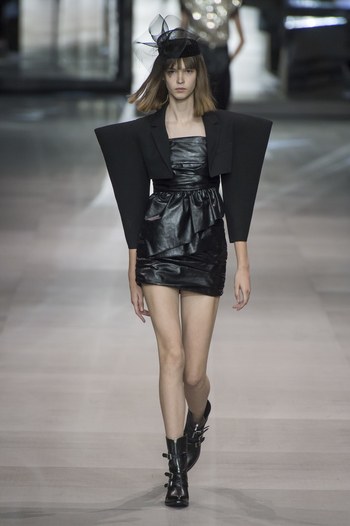 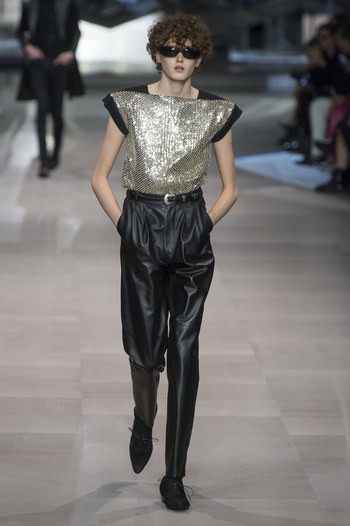 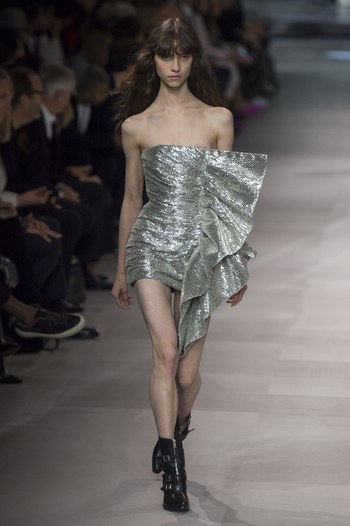 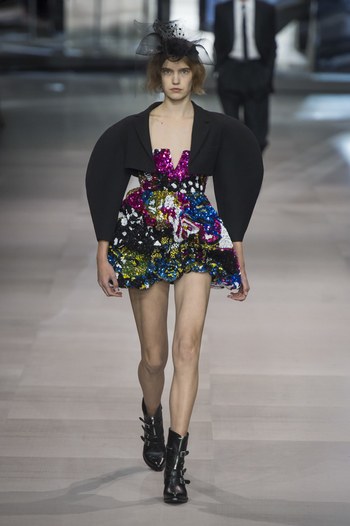 TAKE ME TO YOUR LEADER.....An interesting amalgamation of disco queen (yes, the wondrous 80's are among us) and Japanese architectural...with a smidgeon of stylish alien. 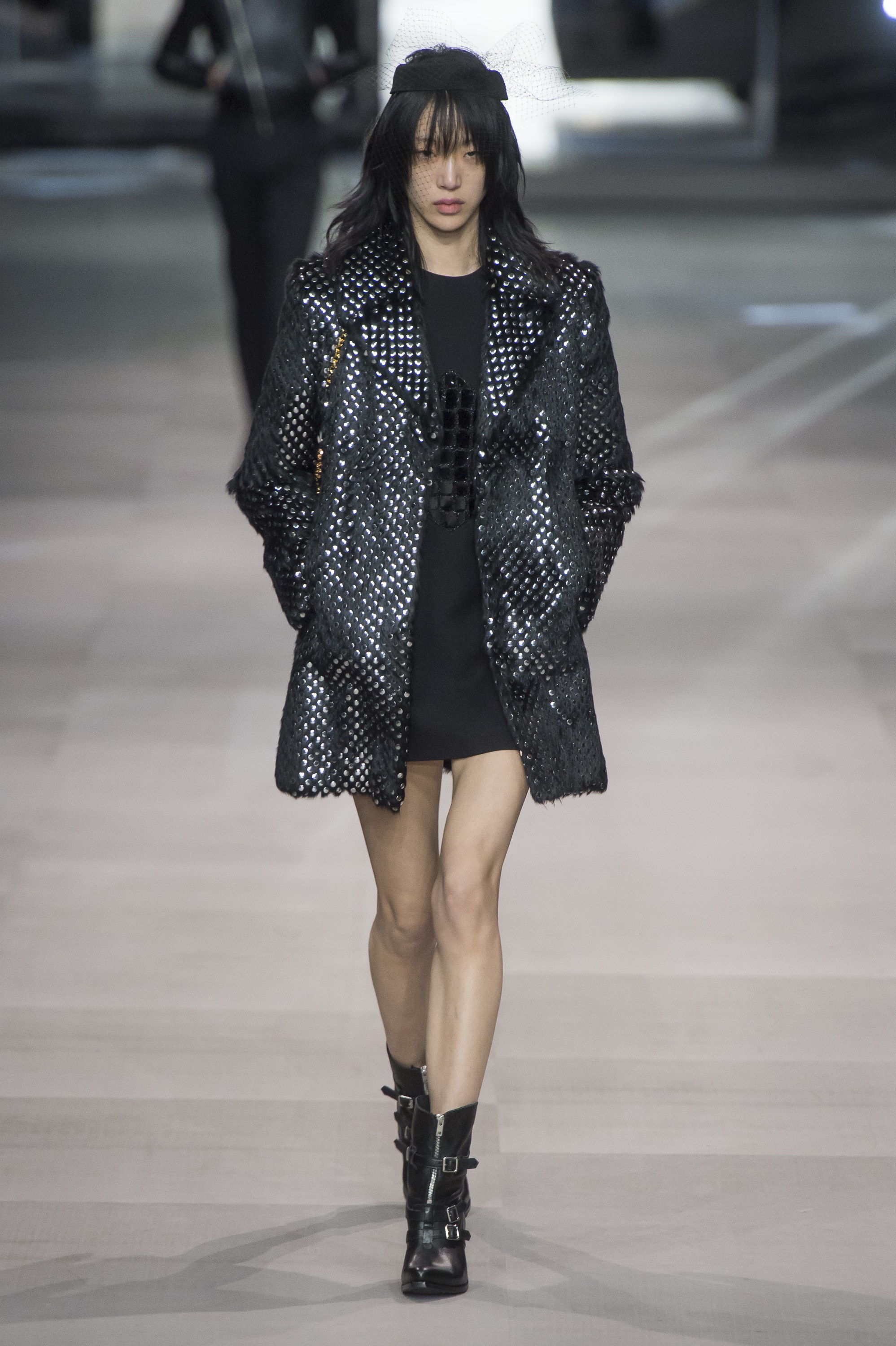 Ahhhhhh, my personal favorite, the perfect easy silhouette made ravishing by the innumerable metallic embellishments, to pair with tuxedo pants at a soiree, or jeans for a weekend sojourn, OR with an LBD for a cocktail affair.... 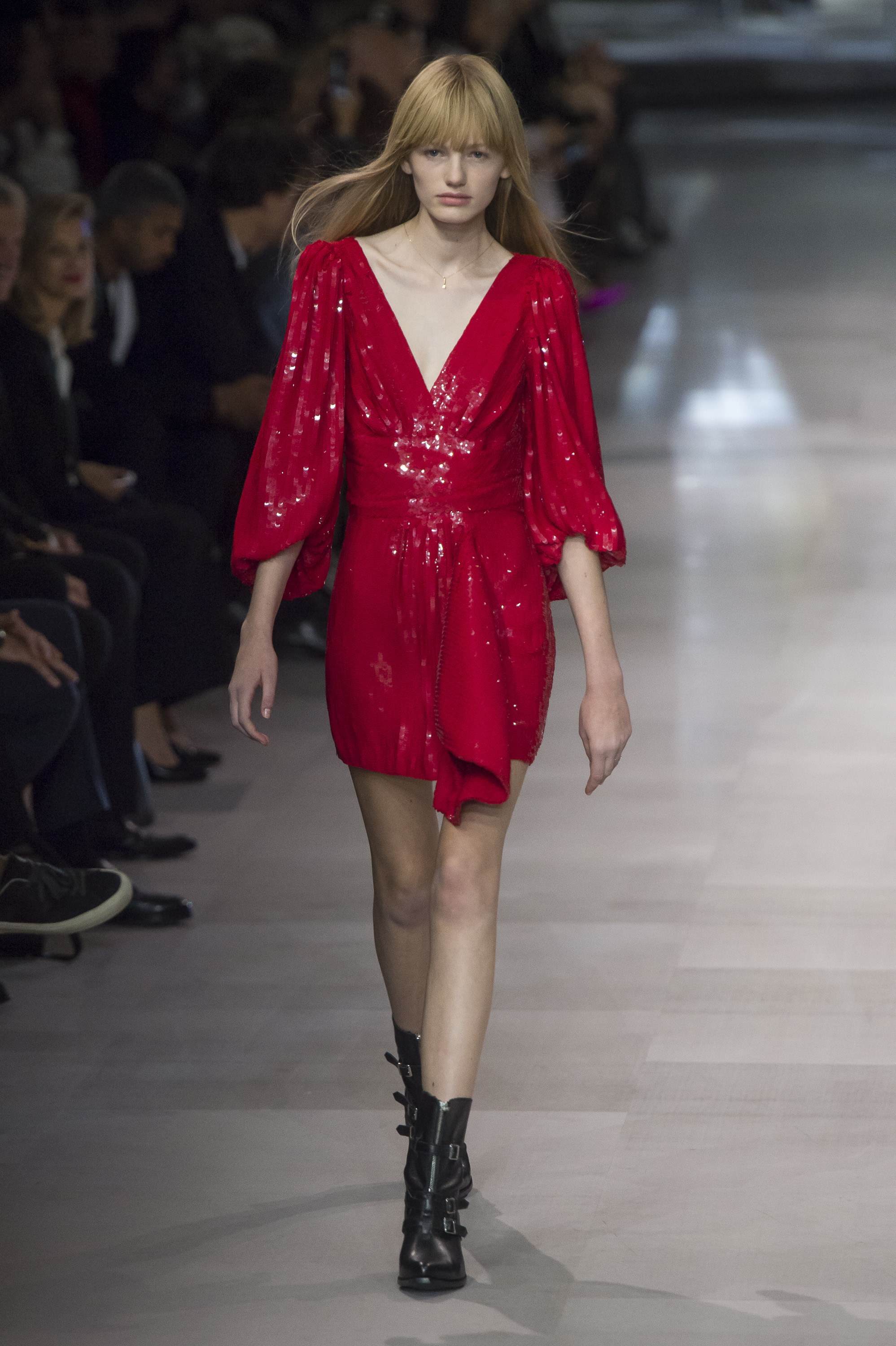 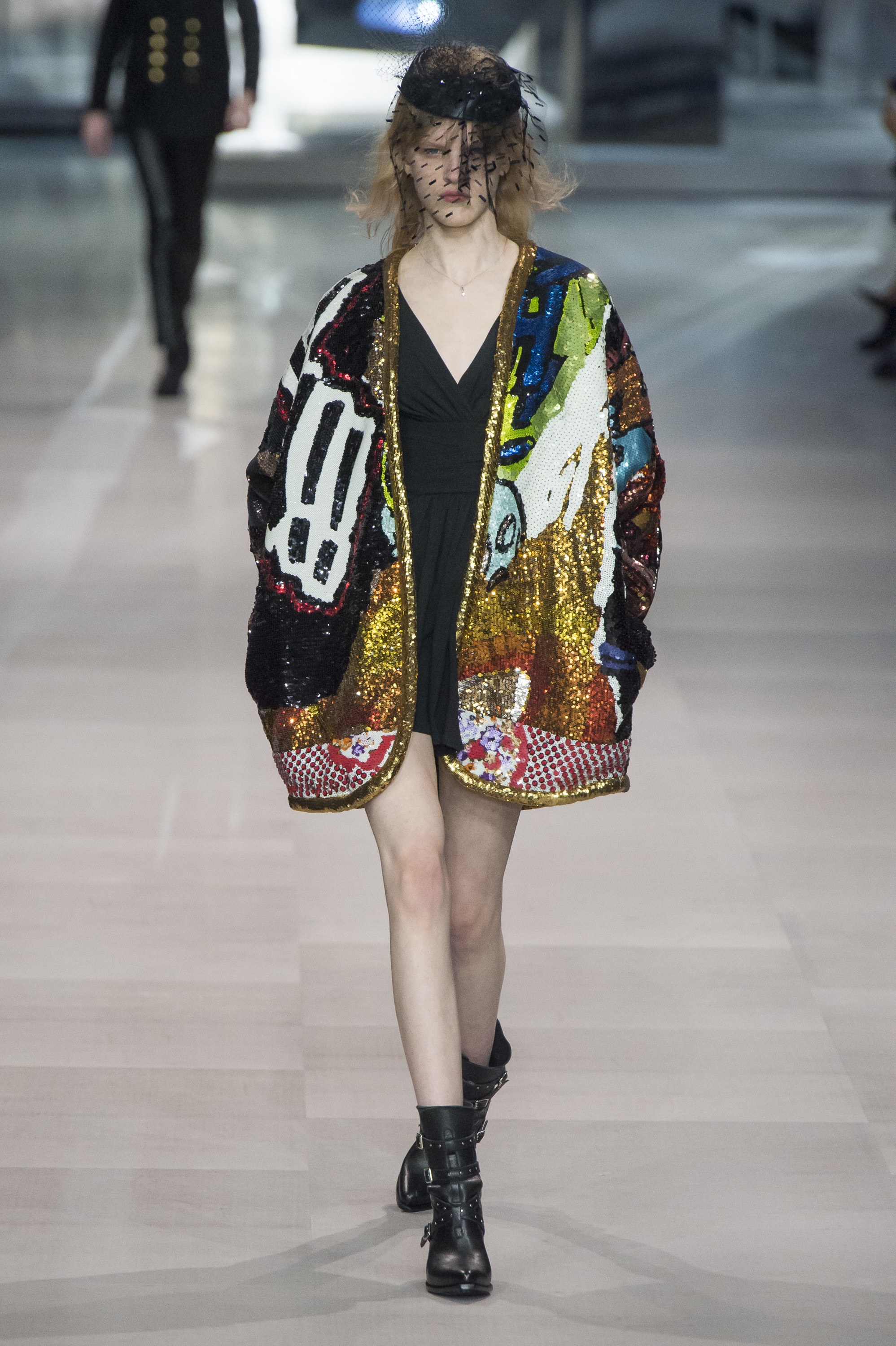 The maiden voyage of Slimane at CELINE was an unmitigated success!  An eclectic yet cohesive hat tip to Rock 'n Roll glam, infused with intriguing androgyny and and ode to unapologetic 80's exuberant ostentation.  FULL STEAM AHEAD!